Meet Kieran Walker. He is one of the partially deceased syndrome (PDS) patients that was judged ready to return home. In the rehab, he kept having frequent flashbacks on things that he did when he was a zombie and has trouble re-adjusting to life after the rising. The partially deceased syndrome (PDS) patients usually have problems going back to the society as they face extreme hostility from ordinary people, so Kieran was holed up in his house as his parents wouldnt want anybody else to know about Kieran's returning. Luke Newberry fits the role as Kieran Walker. He's in love with his best friend, Ric and couldnt cope up when Ric when to joined the army. So he took his own life. This is a brand new idea of zombie. Usually, it's more on stories how people get infected, turn into zombies and starts eating flesh. This explore a brand new angle that what would happened if people are infected with virus that turns them into zombies and it can be cured. How would ordinary-alive people react. There's also an underground movement by the partially deceased syndrome (PDS) survivors that rebel against how there are treated living people. 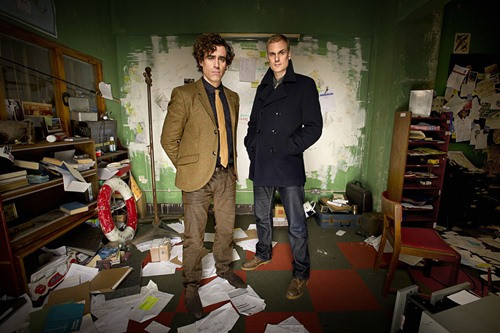 I stumbled upon this series when Sherlock was done for the season and I need something to fill my anguish soul. Dirk Gently a peculiar detective made me smile.Dirk Gently operates his Holistic Detective Agency based on the "fundamental interconnectedness of all things", which relies on random chance methods to uncover connections between seemingly-unrelated cases. He claims that he follows the principles of quantum mechanics, and although the majority of his clients suspect he may be a conman he often produces surprising results. With the help of his assistant, Richard MacDuff, Dirk investigates a number of seemingly unrelated but interconnected cases. MacDuff is actually his partner. The cases in each episodes were very interesting and Dirk is the guy you really don't want to be your friend as he will swindle your money without you realised. But it's too bad it didnt make to season 2. It had good potential as a long running tv series or at least until 3-4 season. I love each episode- quirky, funny lines.

Television detective series which is a prequel to the Inspector Morse Novels. I like british tv series, especially crime solving drama even though I have to admit sometime I couldn't understand what they are saying. So, I have to keep playing back the scene and trying to figure out the words. But it was worth it. Set in 1965, the series centres around the early career of Endeavour Morse (Shaun Evans) after leaving without taking a degree, spending a short time as a cypher clerk, and then joining the police. The character is rather brilliant, a bit cheeky and persistent in finding out the truth. It's 98 minutes per episode and only 4 episodes for season 1.

I'm in LOOOVE with this show! I didnt at first ..I guess I was turn off by the acting on the first episode. Could't see the partner chemistry between Nick and Hank. But then when my mom asked me to watch it with her, back-back episodes.. hey, this is not bad. Plus I really like Monroe. He's adorably goofy and funny at times. After few episodes, the other characters grew on me too.. Some of the wesen are so cute, like rosalee and bud. I like furry animals.

I'm addicted to tumblr.. It's 8.00pm and I stumble upon some tumblr where It the page is continuous, I would keep on scrolling and when I look up at my clock and it's already 3 am. Time sure flies fast when ur on tumblr....thehe.


I am currently addicted to Sherlock BBC and Merlin fandom. Sherlock/John and Arthur/Merlin all the way (^_^)
Need to re-watched the 1st and 2nd season of Sherlock. Have to wait months for the 3rd season, which moffat twitted hopefully will be out before end of this yeah.. hurray!!

I have to re-Download all yaoi manga available + tv series after my samsung external died ( this is my 3rd external) 350 gb of movies, tv series and manga.Had major breakdown, since i spent hours downloading them on my slow streamyx connection.Sigh~

Just finished watching Deka wanko. Paris special. It's a fun episode. From paris to edo era. Didnt see that coming.
Anyway, I hope to get back to manga, since the live action is only 10 episodes. Kiri-san is more cool in manga than in the drama.
And i want more kiri-san and ichiko interaction. kiri-san being jealous was cute though.

I found the the manga after i watched the first series of the drama and found it interesting. Google the title and found deka scans on livejournal. Since it's friend-locked now. I hope i can become a member to access the manga again.

Just finished watching keizoku 2. Awesome series in my opinion. Especially the last 3 episodes. I've forgotten all about the early series of keizoku in 1999, i think.The element of supernatural aspects made it interesting although sometimes i dont get the plot especially in the movie, dreamer.I still dont get the explanation on SPEC, and organisation ( which one is evil?).

Between the first and the newest, the 1999 have more darker storyline and the chemistry between the main actors are more genuine.
Ninomae. I like his character, played convincingly by Kamiki Ryunosuke. Crazy, childish and powerful. I wasnt really shocked about lefty being the evil one. He's was a bit suspicious from the 1st appearance ( i dunno, 6th sense) and it was confirmed when he stole the mirei's drawing. so basically he's not only capable or rewriting memories, he's also can changed appearance from tsuda's face and the twins-blowing-horns. Not sure his actually age but unfortunately he's not immortal..kinda lame.

The fighting scene in the last episode is so-so i guess. Using a tooth sebumi-san? It made me laugh and the look on lefty face was hilarious. Toma's finally using 90% of her brain to stop the bullets.  I hope ninomae comes back to life based on kaichou's shocked? face.

Can't wait for the special ep and movie.
Collapse